The Confederación de Asociaciones Israelitas de Venezuela (CAIV) representing the Jewish community of Venezuela, in reference to the unilateral initiative of The Palestinian Authority (PA) requesting full recognition of a Palestinian state before the United Nations (UN), and given the national governments position outlined in the 17/09/11 correspondence to Mr. Ban Ki-Moon, expresses its strong opposition to the content and terms of the letter in which the Holocaust is trivialized, history is distorted, the Jewish people are attacked and Zionism is criminalized.
Banalization of the Holocaust: The fact of comparing the systematic murder of 6 million human beings by the Nazis for the sole reason of having been born Jewish, with the regretful loss of lives, both palestinian and Jewish, as a result of the legitimate right of Israel to defend its population from terrorist attacks, is an unfortunate trivialization of the Holocaust, the worst crime ever perpetrated by mankind. Even more serious and insulting is the suggestion that the memory of Holocaust victims is used to attack other people.
Legitimate Self Defense: The letter of President Chavez to Mr.Ban Ki Moon mentions the alleged “crimes” of Israel, but fails to point out the hundreds of murderous attacks against innocent civilians carried out by Palestinian terrorists, including the thousands of missiles fired from Gaza against Israeli towns  that have generated the natural exercise of sovereignty and the Israeli governments response in defense of its nationals. The following questions are therefore valid: How would Venezuela react if missiles would be launched for weeks from a neighboring country, against towns inside our territory?  What would the sovereign state of Venezuela´s conduct be if the constitution of a neighbor country would call for the murder of our population, such as Hamas, the terrorist organization that rules Gaza, does. Article 7 of the Hamas charter indicates: "The day of judgment will not come about until Muslims fight the Jews (killing the Jews)… there is a Jew behind me, come and kill him.”
Demonization of Zionism: The government´s stance, as indicated in the letter signed by the president, criminalizes and demonizes Zionism, which is nothing more than the national liberation movement of the Jewish people. Zionism is not expansionist, nor imperialist, nor colonialist, nor genocidal nor racist. It simply represents the yearning of all the Jewish people to have their own country and state in the land where they have lived and settled since biblical times. It is as valid as the national liberation movement of any nation in the world, including the Palestinian. The demonization of Zionism is merely the new form of anti-Semitism.
Israel as a Jewish State: It is appropriate to emphasize that Venezuela, our home, was one of the first nations to approve and recognize the establishment of Israel as a Jewish state. Let us also remember that, the same UN resolution that in 1947 created the state of Israel with the favorable vote of the majority of the countries, including the former Soviet Union, also established an Arab state. It was the war declared by several Arab countries against the newly created Israel, which led the to the Palestinian exodus and refugee problem. Refugees that were certainly not welcome in the Arab countries in which they now live, being alienated from society, living in tents in inhumane conditions for tens of years and even murdered, as the case of Black September, where more than 20,000 Palestinians were massacred by the Jordanian army in the only true and known genocide of the Palestinian people. Instead, the Arab population that decided to stay in Israel, enjoys all the rights as Israeli citizens and even come to occupy positions of judges, ambassadors, MPs and ministers.
Racism and Exclusion: The proposed Palestinian state does not provide the same benefits for the Jews. Recently, the Palestinian ambassador to the United States Maen Areikat stated that "the Palestinian state must be free of Jews" This is clearly a discriminatory and racist policy.
Our Position: Our community is concerned by the clearly biased position taken by the national government in this case which does not contribute at all to the peace process in the Middle East.
As indicated in a statement released on 16/09/11, our position on the issue can be summarized as follows:
1. Rejection of the unilateral initiative taken by the PA requesting full recognition of a Palestinian state before the UN, which is in clear violation of the Oslo accords of 1993.
2. Reaffirmation of our strong belief that the Palestinian people have the right to their own state, but it should be established solely through bilateral negotiations with the State of Israel. Only in this way will boundaries and other terms be agreed to ensure the long-awaited lasting and stable peace in the region.
3. Reiteration of our absolute identification with the State of Israel, to which we are united through unbreakable historical, cultural, religious and family ties.
4. Our desire for the international community, including our national government, to help boost the dialogue between the parties, the only possible way to achieve the goal of two peoples, two states, living in harmony, peace and security.
We would like to conclude with a quote from Golda Meir, prime minister of Israel 1969-74, a position which, by the way, no woman could hold in an Arab country due to gender discrimination:
“The only alternative to war is peace and the only road to peace is negotiations”. 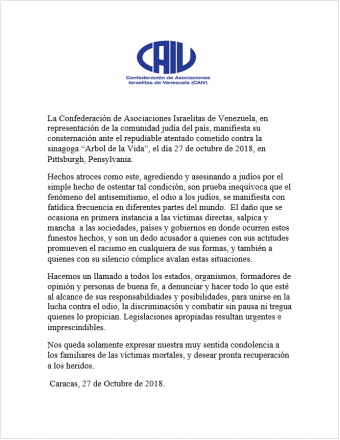 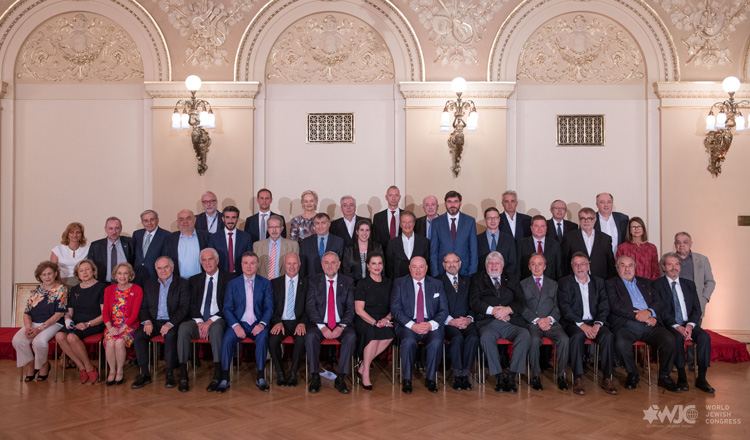